Global economic activity, despite remaining fragile and uneven, has maintained a firmer undertone from the second quarter of 2013. However, the overall growth momentum slowed somewhat in the final quarter of the year after peaking in the third quarter as growth moderated in several emerging Asian and European countries, as well as in advanced economies. While the continued fragility of the recovery in the euro area and fears of deflation prompted the European Central Bank (ECB) to reduce its key policy interest rate in November 2013, signs of improvement in economic conditions brought the Federal Reserve in the United States (US) to announce in December 2013 the first cutback in the pace of its purchases of securities – while still maintaining ultra-low policy interest rates.

The actual onset of the tapering of quantitative easing influenced sentiment in global financial markets, reducing the relative attractiveness of exposure to emerging-market assets and triggering portfolio adjustment. Against this background, several emerging-market economies with large current-account deficits recently experienced significant currency depreciations and heightened inflation. However, international commodity prices remained well contained and with the world economy continuing to function below full capacity, global inflation remained fairly benign during the period under review, although significantly higher in emerging economies than in advanced economies.

The South African economy recorded erratic quarter-to-quarter growth in 2013, with the overall pace of expansion in real output for the year as a whole a disappointing 1,9 per cent. Apart from longer-term impediments to growth such as constrained electricity supply and logistical bottlenecks, production in the first quarter of 2013 was held back by industrial action, fire damage at a large steel mill and maintenance of production facilities, while widespread strike action again disrupted production in the third quarter. From the low base established in the third quarter, the subsequent normalisation of production propelled growth to an annualised rate of 3,8 per cent in the fourth quarter of the year. South Africa’s erratic growth pattern could well continue in the first quarter of 2014, with protracted industrial action again weighing on production.

As labour relations normalised, a rebound in manufacturing production, especially in the motor vehicles and components subsector, made the largest contribution to the buoyant rate of real economic growth in the fourth quarter of 2013. Mining production also rose briskly over the same period, led by diamonds, gold and platinum group metals. The trade sector similarly made a significant contribution to growth in the fourth quarter as rising retail and wholesale sales more than fully countered a decline in motor trade activity. Real agricultural production registered a strong performance in the fourth quarter of 2013 primarily on account of an increase in field crop production, particularly in sugar cane. Rising civil construction activity was reflected in an increase in real value added by the construction sector, whereas real electricity production declined in the fourth quarter, partly as a result of supply constraints.

The gradual consolidation of household finances continued in the final quarter of 2013, as the pace of increase of real final household consumption expenditure slowed marginally further and the ratio of household debt to disposable income edged lower. Real spending on durable and semi-durable goods rose at a somewhat slower pace in the fourth quarter, with expenditure on furniture and appliances contracting along with slower growth in spending on personal transport equipment and on computers and related equipment.

The pace of increase in real final consumption expenditure by general government edged higher in the fourth quarter of 2013 as outlays on non-wage goods and services increased, reflecting in part the expenditure related to the state funeral of the former president of South Africa, Mr Nelson Mandela, alongside somewhat higher real compensation of government employees.

Growth in real capital expenditure moderated notably in the fourth quarter of 2013. This was due to a sharp deceleration in the pace of growth in real fixed capital formation by private business enterprises, as real outlays in the manufacturing sector slowed. Capital spending on wind farms and solar plants for the generation of electricity, which gained in significance in 2013, continued at a more moderate pace in the final quarter of the year.

While constituting less than a fifth of the country’s overall fixed capital formation, real capital spending by general government advanced at a brisk pace in the final quarter of 2013, broadly maintaining its momentum of the previous quarter. Priority areas included the construction and upgrading of roads, schools and hospitals, with the provincial governments and local authorities in particular stepping up their expenditure. At the same time the level of real fixed capital expenditure by public corporations essentially moved sideways – albeit at a high level, mainly reflecting ongoing spending by the electricity and transport sectors. The accumulation of inventories recorded in the first three quarters of 2013 made way for destocking in the final quarter of the year. The reversal in stockpiling in the final quarter resulted mainly from a de-accumulation of inventories in the manufacturing sector and in the strike-prone mining sector, reflecting fairly subdued business confidence levels.

Partly related to the negative inventory investment, merchandise imports contracted significantly in the fourth quarter of 2013, albeit from a high base. Pronounced decreases were recorded in imports of especially machinery and electrical equipment, and vehicles and transport equipment. By contrast, merchandise exports rose in the fourth quarter, partly as a catch-up action following the strike-induced setbacks to production and exports in the previous quarter. At the same time the deficit on the services, income and current transfer account widened somewhat in the fourth quarter of 2013, not least due to lower gross dividend receipts from the rest of the world following exceptionally high receipts in the preceding quarter. These developments culminated in a somewhat narrower deficit on the current account of the balance of payments: the fourth-quarter deficit amounted to 5,1 per cent of gross domestic product, lower than in the third quarter when the shortfall ratio amounted to 6,4 per cent.

With international investor sentiment towards emerging-market economies having turned negative during the fourth quarter of 2013 in reaction to the imminent tapering of asset purchases by the US Federal Reserve, a sharp reversal of portfolio flows was registered in the final quarter of 2013. The net inward movement of foreign capital through the financial account of the balance of payments moderated considerably in the fourth quarter of the year, with the inflow mainly taking the form of an increase in other investment liabilities. Throughout the fourth quarter the South African Reserve Bank (the Bank) maintained its gross gold and other foreign-exchange reserves at a level of around four-and-a-half months’ worth of imports.

The investor dynamics generated by the tapering announcements in the US, the ongoing labour strife and the sizeable deficit on the current account of the balance of payments contributed to a renewed depreciation in the exchange value of the rand in the final weeks of 2013 and early 2014. Although the pass-through of the depreciation in the exchange rate to inflation remained muted, prices and expectations started to respond; bolstered by higher food and fuel prices, consumer price inflation for instance most recently picked up to a level just below the 6 per cent upper limit of the inflation target range.

Despite instances of adversarial industrial relations, average wage settlements in 2013 remained at levels just below 8 per cent throughout the year. Employer-surveyed data show modest growth in employment in the formal sector in the year to the third quarter of 2013, with the public sector rather than the private sector responsible for the limited number of jobs that were created. Unemployment remained structurally high at more than 24 per cent of the workforce.

The slow and uneven pace of economic growth and subdued levels of confidence contributed to sluggish growth in banks’ credit extension. Unsecured lending to households lost its earlier vigour in the course of 2013, while the pace of increase in instalment sale credit and leasing finance slowed in recent months, consistent with the reduced buoyancy of vehicle sales. Growth in mortgage advances picked up slightly but remained subdued.

Towards the end of 2013 house price inflation was maintained at year-on-year rates of around 7 per cent, with tentative signs of an improvement in turnover. With yields on deposit-type investments low, South African share prices fluctuated higher in 2013 and early 2014 to successive record levels. Domestic bond yields, which increased significantly in the wake of the first tapering remarks by the US Federal Reserve in May 2013, rose further in the second half of 2013 and first two months of 2014. Owing to the marked depreciation in the exchange value of the rand, the rand value of most portfolios of foreign assets increased sharply in recent months.

The public-sector borrowing requirement remained marginally above 6 per cent of gross domestic product in the period April to December 2013, supporting the economic recovery as both general government and the non-financial public corporations incurred deficits. Delivered in February 2014, the Budget for fiscal 2014/15 essentially maintained an even keel fiscal policy, providing consistency and stability while simultaneously moving ahead in the implementation of the National Development Plan (NDP). Balancing the key principles of countercyclicality, debt sustainability and intergenerational fairness in an environment of lacklustre growth, the Budget provided for moderate increases in real spending, although within an explicit expenditure ceiling. Compared with the October 2013 Medium Term Budget Policy Statement, a slightly quicker pace of narrowing of the consolidated budget deficit was projected in support of debt stabilisation, while at the same time improving the composition of government expenditure through further emphasis on capital spending and alignment with the NDP.

A notable further depreciation in the exchange value of the rand in January 2014 significantly raised the risk of inflation rising above the target range and staying there for a protracted period of time. To address this risk the Monetary Policy Committee (MPC) at its January 2014 meeting decided to increase the repurchase rate from 5,0 per cent to 5,5 per cent per annum – the first change in the repurchase rate since July 2012, when it was lowered by 50 basis points. The 18-month trough in interest rates was therefore slightly longer than in the previous interest rate cycle: the 2005–2006 trough lasted 14 months, with the repurchase rate at the time being maintained at a level of 7 per cent. 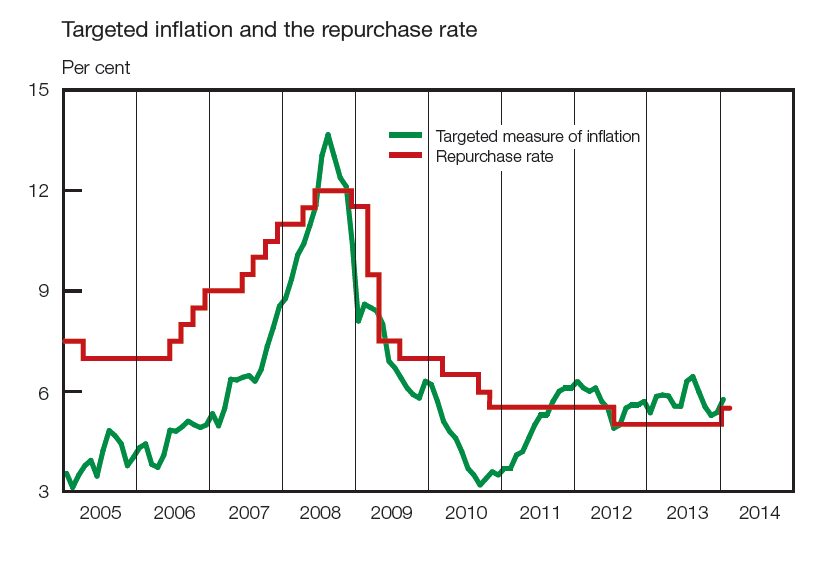