The world economy gained momentum since around mid-2003, with the acceleration in activity spreading to Japan and to some extent even to the euro area – regions previously suffering protracted periods of lacklustre growth. Growth in China and elsewhere in Asia was particularly strong. While these circumstances were favourable for commodity prices in general, consumer price inflation remained subdued in most parts of the world. A handful of central banks pre-emptively started raising interest rates moderately in order to contain future inflation, but levels of short-term interest rates remained fairly low.

Inflation fears were fuelled by the upward trend in the price of crude oil. While the oil price was supported by the strengthening of the world economy and geopolitical tensions and concerns, it gave up some of its earlier gains in early June as OPEC announced an increase in production quotas and as market participants started to pay more attention to the sustained above-quota oil output of most OPEC member countries and the likely impact of the high level of the oil prices on quantities supplied and demanded.

Assisted by favourable export prices, lower interest rates and a growth-supportive fiscal policy, growth in South Africa’s real gross domestic product picked up decisively during the first quarter of 2004 to reach an annualised rate of 3,1 per cent – more than double the pace attained in any of the four quarters of 2003, and sufficient to signify an increase in real production per capita.

Nevertheless, real expenditure growth continued to exceed the pace of growth in real production. Real fixed capital formation recorded an exceptionally high rate of increase in the first quarter of 2004 as several aircraft were acquired by South African Airways.

Private business enterprises in the agricultural, mining and manufacturing sectors also stepped up their fixed capital outlays. Growth in real household consumption expenditure also gained further momentum in the first quarter, supported by solid increases in households’ real disposable income and lower interest rates. Expenditure on durable and semi-durable goods recorded particularly brisk rates of increase. Real government consumption rose further, as another corvette was acquired by the South African Navy – the second in as many quarters – while other government consumption was also stepped up.

Despite the recovery in the world economy, the volume of South African exports contracted further in the first quarter of 2004. However, the value of exports was raised by the significant improvement in the prices of South African export commodities. Import volumes also declined somewhat in the first quarter of 2004. As a result of these developments, the deficit on current account of South Africa’s balance of payments edged down slightly to 1,6 per cent of gross domestic product in the first quarter. At this level it was easily financed by inflows of direct and portfolio investment. The Reserve Bank continued its accumulation of foreign exchange reserves and strengthening of its international liquidity position, sterilising the potential impact on domestic money-market liquidity of its acquisition of foreign exchange reserves.

The exchange rate of the rand against a basket of currencies recovered by 16 per cent in the year to the end of December 2003 and, on balance, appreciated by a further 3.1⁄2 per cent in the five-month period to the end of May 2004, despite the setback to the international prices of commodity exports in the second quarter following indications that steps would be taken to cool down the buoyant economic growth in China. While these movements of the exchange rate of the rand reduced the international competitiveness of South African producers, it also caused the prices of imported goods to record twelvemonth declines over the past 13 months, notwithstanding a significant increase in the international price of crude oil over this period. Goods price inflation was accordingly moderated, both at the production and consumer level, contributing to a reduction in twelve-month CPIX inflation – the official target variable – to below 6 per cent from September 2003. By April 2004 CPIX inflation had been maintained within the 3-to-6 per cent target range for eight months in succession. The Reserve Bank’s repurchase rate has been maintained at 8 per cent since early December 2003. 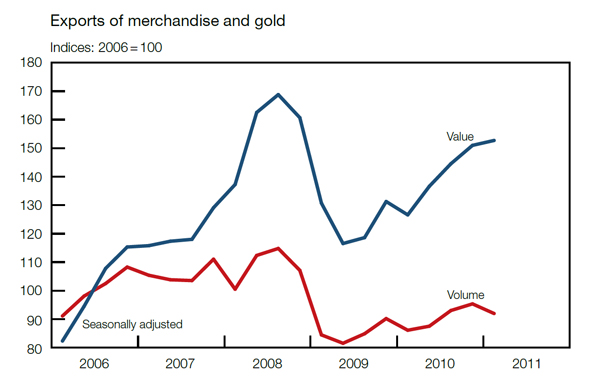 Growth in the monetary aggregates accelerated over the February 2004 month-end when bond redemption and interest payments flowed from government accounts to private- sector deposit accounts with the banks. In time, portfolios were adjusted and monetary growth decelerated in March and April. As might be expected under conditions of lower interest rates, brisk domestic expenditure and rising house prices, banks’ mortgage, instalment sale and leasing advances to the domestic private sector maintained strong growth in the first four months of 2004. The banks’ other loans and advances were more subdued, inter alia reflecting disintermediation as some corporate borrowers issued corporate bonds rather than making use of bank credit.

Turnover in the property market reached exceptionally high levels while house prices continued to rise briskly, recording twelve-month rates of increase of around 24 per cent in the first five months of 2004. Yields on bonds rose somewhat from April 2004, both in the international and domestic markets, as investors became less sanguine about prospects for inflation. Share prices on the JSE Securities Exchange SA displayed a dull performance from February 2004, in contrast to the bull rally of the preceding ten months.

The authorities continued to pursue a cautiously expansionary fiscal policy, recording a public-sector borrowing requirement of 3,2 per cent of gross domestic product in the 2003/04 fiscal year – higher than before, but nevertheless in accordance with widely accepted principles of fiscal prudence. Rising capital expenditure by the public sector will not only contribute towards the more efficient functioning of the economy but through certain public works programmes also to the enhancement of skills and creation of employment.