Below are a set of frequently asked questions related to developments in respect of South Africa’s benchmark reform journey.

Market participants often use widely known interest rates to price, value and measure the performance of financial securities across various markets, including equity, credit, commodity, fixed income, and foreign exchange (FX) markets. These rates are commonly characterised as reference rates as they are often referenced in financial contracts. Some of these rates are determined solely by credible institutions, such as the policy rates of central banks, while others combine inputs from numerous contributors to form indices that are commonly referred to as benchmark rates. Essentially, reference rates tend to reflect wider market conditions, assist in price discovery, and reduce information asymmetry.

Certain benchmark rates are deemed critical as they underpin the pricing of a large volume of financial contracts worth trillions of rands and are used to measure the performance of large investment funds. Consequently, they are deeply embedded in the global financial system and play an important role in the functioning of modern financial markets. Examples of such critical benchmarks include the US dollar London Interbank Offered Rate (Libor) and the Johannesburg Interbank Average Rate (Jibar), which are widely referenced in financial instruments within the South African financial market.

The reform of key reference rates began in earnest after the Financial Stability Board’s (FSB) review raised concerns about the integrity and reliability of certain interbank offered rates’ (IBORs) benchmarks (report of the FSB review can be accessed via https://www.fsb.org/2014/07/r_140722/). It became evident that IBORs were susceptible to manipulation as their computation relied on the panel of contributing banks’ indicative rates. Furthermore, it was questionable whether the IBORs were still representative of the interest that they purported to measure given the significant decline in the volumes of unsecured funding market activity that underpinned them.  On the basis of these findings, a number of jurisdictions convened national working groups to review their respective IBORs. Most working groups recommended that the IBOR rates be discontinued and replaced with more robust risk-free or near risk-free rates. Some regulatory authorities went a step further, such as the United Kingdom’s Financial Conduct Authority, which announced that it would no longer compel panel banks to continue their Libor submissions after December 2021, effectively heralding the end of the Libor.

The SARB has been engaging market participants on the need to reform local interest rate benchmarks. This is partly due to South Africa’s involvement in the efforts of the Financial Stability Board’s Official Sector Steering Group (OSSG) to strengthen critical interest rate benchmarks and promote adherence to international best practice. In addition, the case for reforming the Jibar, which is the most widely used reference rate in South Africa and is therefore of systemic importance, was informed by several concerns, including that:

The SARB is also cognisant of the role benchmarks play insofar as they serve as reference rates for a large number of financial contracts. This implies that they have a key role to play in the transmission of monetary policy decisions and the cost of (and remuneration of) capital in the broader economy.

While the SARB was initially at the forefront of the development of proposals on how the reform of interest rate benchmarks, including the Jibar, could be achieved, the mandate for determining a market preferred choice of an alternative reference rate (also referred to as the preferred successor rate) to replace the Jibar was given to the MPG. Nonetheless, the SARB has made it clear that the Jibar will cease some time in the future.

The Market Practitioners Group (MPG) is a joint public and private sector group that was established by the SARB in 2018 to drive the reference rate reform programme in South Africa. The MPG is chaired by the deputy governor of the SARB response for financial markets and is organised in such a way that it comprises users of reference rates from different pockets of the market, including members of the savings industry, corporate treasuries, the banking sector and the official sector.

The MPG established workstreams, each with a focus on the different aspects of the programme, with the responsibility to execute the mandate of the MPG. There are currently seven work streams, namely:

Two workstreams that were established have since been dissolved after completing their tasks. These are:

The MPG has designated the South African Rand Overnight Index Average (ZARONIA) as the preferred successor rate that will most likely replace the Jibar. ZARONIA’s definition and calculation methodology are contained in the ‘Draft statement of methodology and the policies governing the SARB-administered interest rate benchmarks’. The rate has been back-tested using a five-year sample of bona fide transactions collected from commercial banks. The results of the back-testing exercise were published in a feedback report in November 2021. It is envisaged that the SARB will start publishing the rate daily during the second quarter of 2022 to allow market participants to observe the rate and to develop strategies to promote voluntary adoption in cash and derivatives markets. The SARB and the MPG will provide more clarity around timelines and key milestones. Note: The Jibar will continue to be made available in parallel with the new rate for a limited period, to avoid cliff-edge effects.

The cessation of the Jibar refers to the situation where the benchmark will no longer be published past a certain date. This will mean that all contracts referencing the Jibar will need to be actively transitioned to an alternative reference rate and/or make provision for the use of an appropriate fallback rate. New contracts entered into after the announcement of the cessation date and which mature after the cessation date will need to reference an alternative rate, preferably the designated successor rate.

The current proposals are to designate the South African Rand Overnight Index Average (ZARONIA) as the official successor rate to the Jibar. This means that the official sector view is that ZARONIA will be appropriate for the majority of contracts and exposures relevant to South African market participants. However, it is important to note that ZARONIA will not be mandated for use in every scenario, and it may be appropriate to reference other available and approved rates, for example, the prime rate or SARB policy rate.

ZARONIA is an acronym for South African Rand Overnight Index Average. It is the MPG’s preferred successor rate to the Jibar. The rate is a measure of the interest rate at which rand-denominated overnight wholesale funds are obtained by banks in South Africa. The rate is based on unsecured overnight call deposits placed with commercial banks, which are classified as deposit-taking institutions in the Banks Act 94 of 1990.

The process of selecting ZARONIA as the preferred successor rate to the Jibar was guided by the recommendations made by the Risk-free Reference Rate Workstream to the MPG. These recommendations are contained in a position paper which outlined a number of considerations for the design of alternative reference rates. This work also acknowledged that the global approach to working towards developing risk-free rates recognises that risk-free does not necessarily mean the credit risk of trading participants is zero, but that it is as close to zero as possible (i.e. near risk-free). It further acknowledged circumstances that are specific to the South African financial markets, such as limitations to how secured markets operate in South Africa.

On each South African business day, ZARONIA is determined as a trimmed, volume-weighted mean of the central 80% of the distribution of interest rates paid on eligible unsecured overnight call deposits, rounded off to three decimal places.

The SARB is the administrator of ZARONIA and will produce and publish the rate in accordance with the terms specified in the ‘Draft statement of methodology and the policies governing the SARB-administered benchmarks’. This statement requires that the headline rate is published on the SARB website every South African business day at 10:00. In the event that an error is discovered after the publication of a benchmark rate at 10:00, and if such an error pertains to the calculation process or to the transaction data supplied to the SARB, the benchmark rate may be republished at any time before 12:00 South African time.

The use of SARB-administered benchmarks is free of charge. Therefore, it is not subject to a licence agreement between the user and the SARB, nor between the user and any agent to which the SARB may delegate some or all of its responsibilities pertaining to the determination of these benchmarks. In line with the publication policy, all SARB-administered benchmarks will be made available on the official website of the SARB at the stated times, as well as via the SARB online statistical query.

The SARB recommends that, as a starting point, market participants consider the following questions:

The illustrations below provide details of the five-step approach to transition that the SARB has opted for. Essentially, this process entails strengthening the existing reference rate (Jibar) to ensure that it remains a credible reference rate until the transition to an alternative reference rate is complete. This is then followed by a conceptual process of designing a suite of benchmark rates from which a preferred successor rate is selected. This stage also includes the development of the benchmarks using historical data. Once the MPG makes its decisions about the preferred successor rate, the rate is then produced on a daily basis for observation – a process that leads to market adoption and, eventually, cessation of the existing (Jibar) reference rate. 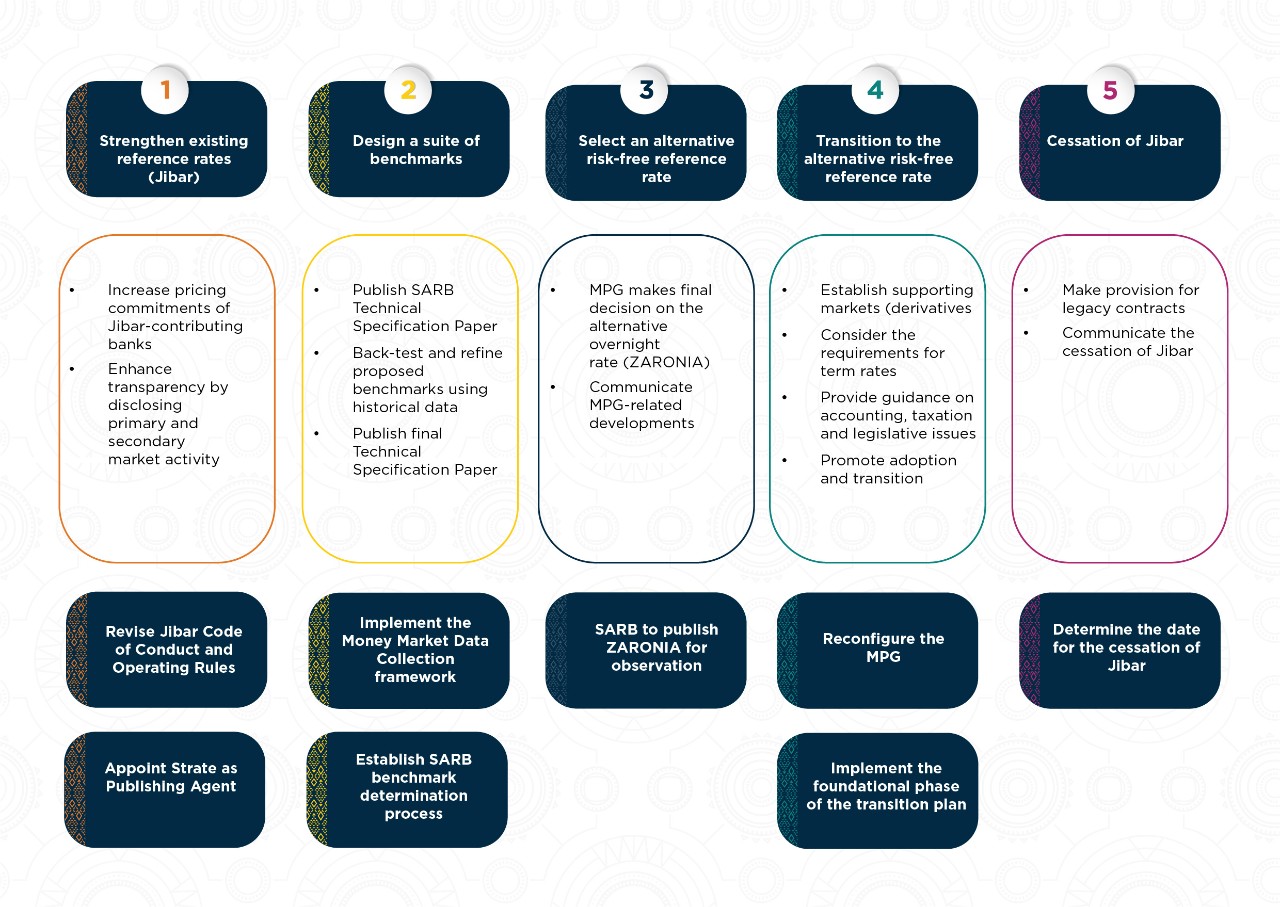 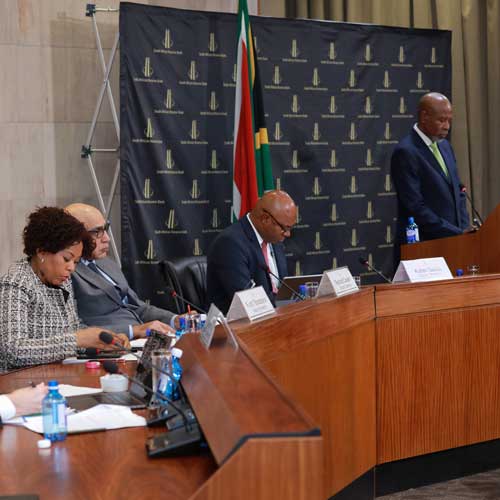 Learn more about the announcement made by the MPG. 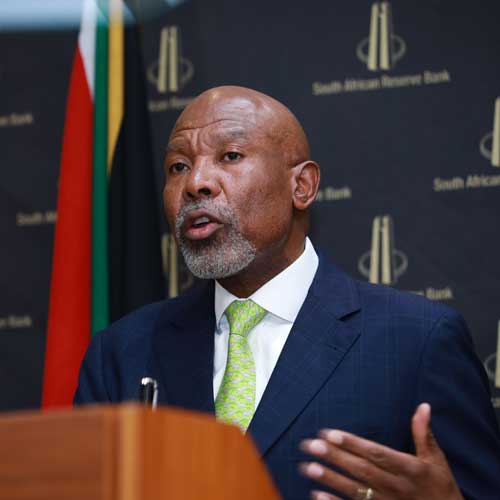 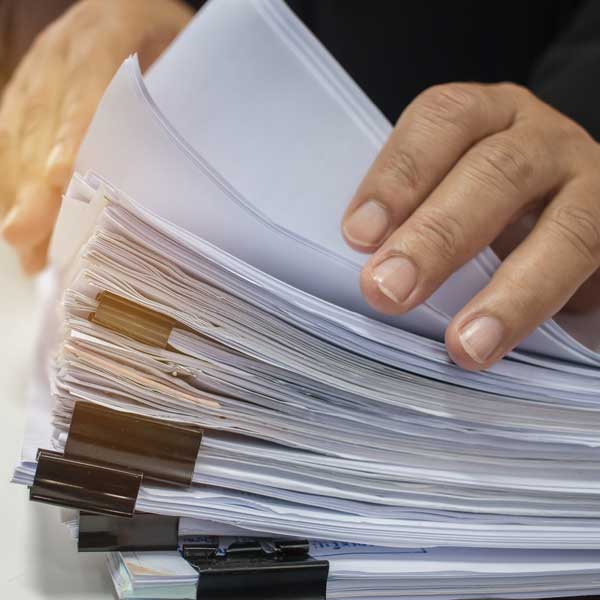 If you have further questions about MPG, please do not hesitate to contact us on MPGSecretariat@resbank.co.za.