Global inflationary pressures remained fairly subdued in the fourth quarter of 2017, despite the prices of most international commodities increasing further over the period. In particular, energy prices and, to a lesser extent, those of metals and minerals increased notably, with the surge in energy prices resulting largely from a reduction in the global supply of crude oil.

In South Africa, growth in real gross domestic product (GDP) accelerated to an annualised rate of 3.1% in the fourth quarter of 2017, marking the third consecutive quarterly growth rate above 2.0%. This is consistent with the upward trend in the composite leading business cycle indicator since March 2016. For 2017 as a whole, real GDP growth accelerated to 1.3% from an upwardly revised 0.6% in 2016. 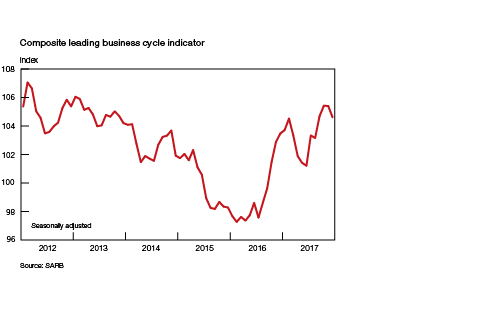 The acceleration in real output growth in the fourth quarter of 2017 was driven by a faster pace of expansion in economic activity in the secondary and tertiary sectors. By contrast, output growth slowed notably in the primary sector, largely due to a contraction in mining output. Growth in real agricultural output also slowed somewhat, but nevertheless remained buoyant.

Faster growth in the real gross value added (GVA) by the secondary sector in the fourth quarter of 2017 resulted from a third successive quarterly acceleration in manufacturing output growth, supported by increased manufactured exports as well as a rebound in real activity in the sector supplying electricity, gas and water. By contrast, the real output of the construction sector contracted further as both residential and non-residential building activity decreased.

The acceleration in real output growth of the tertiary sector in the fourth quarter of 2017 was due to faster output growth in all four of the services subsectors. Real activity in the commerce sector rebounded in the fourth quarter as the real GVA by the wholesale, retail and motor trade subsectors increased. Increased activity in land freight transportation drove the expansion in the real output of the transport sector, while the real output of the finance sector accelerated largely due to increased activity in the equity market.

Growth in real final consumption expenditure by households accelerated in the fourth quarter of 2017 as households’ real spending on semi-durable and non-durable goods increased at a faster pace, supported partly by the significant Black Friday promotions. Real household spending on durable goods slowed over the period, while real outlays on services contracted. Growth in household consumption expenditure was supported by an increase in households’ real disposable income in the fourth quarter of 2017, as the real compensation of employees increased.

Real gross fixed capital formation reverted from a contraction in the third quarter of 2017 to a firm increase in the fourth quarter, driven by sharp rebounds in fixed investment spending by the private sector and public corporations. The turnaround in private capital investment was driven by significant outlays on machinery and transport equipment. By contrast, fixed capital spending by general government contracted in the fourth quarter of 2017.

Domestic employment growth remained lacklustre and South Africa’s seasonally adjusted unemployment rate increased marginally to 27.6% in the fourth quarter of 2017. Enterprise-surveyed formal non-agricultural employment decreased for a second successive quarter in the third quarter of 2017, led by job losses in the goods-producing sectors of the economy, while some job creation occurred in the services sectors.

Year-on-year growth in labour productivity in the formal non-agricultural sector accelerated slightly in the third quarter of 2017. Growth in nominal unit labour cost moderated to 5.1% over the period as remuneration growth slowed, while real output growth accelerated. Despite slower growth in total nominal formal non-agricultural remuneration in the third quarter of 2017, real wages per worker increased year on year for a second successive quarter following four consecutive quarters of contraction.

The net inflow of capital on South Africa’s financial account of the balance of payments increased notably from the third to the fourth quarter of 2017, driven largely by significant net portfolio investment inflows. Non-residents’ net purchases of domestic equity securities increased markedly over the period, while their net purchases of domestic debt securities also increased. For 2017 as a whole, the acquisition of domestic debt and equity securities by non-resident investors almost doubled compared to 2016, reflecting the global search for higher investment returns. South Africa’s positive net international investment position (IIP) has increased significantly from the end of December 2016 up to the end of September 2017. In the three months to the end of September 2017, the increase was largely driven by the value of foreign assets which increased by much more than the value of foreign liabilities.

The external value of the rand increased by 8.3% on a trade-weighted basis in the fourth quarter of 2017 – the largest quarterly increase since the second quarter of 2009. However, the exchange value of the rand initially decreased up to mid-November as domestic political uncertainty intensified following a surprise cabinet reshuffle, the 2017 Medium Term Budget Policy Statement (MTBPS) which showed a marked deterioration in the fiscal position, and increased expectations of a credit rating downgrade. These developments also impacted domestic money market rates and rates on forward rate agreements which trended higher up to mid-December 2017. South African government bond yields also increased markedly over the period.

Subsequently, the exchange value of the rand appreciated significantly from around mid-November 2017 up to the end of February 2018; firstly after an international credit rating agency downgraded South Africa’s local-currency debt and another rating agency put the country’s credit rating on review instead of an immediate downgrade, and later in response to the outcome of the African National Congress’ (ANC) elective conference in December and the subsequent positively perceived domestic political developments. In step with the marked appreciation in the exchange value of the rand, domestic money market rates and South African government bond yields declined notably over the period, reflecting improved investor sentiment and lower domestic inflation expectations. By contrast, the appreciation in the exchange value of the rand contributed to a decline in share prices of companies listed on the JSE Limited (JSE) from the all-time high reached on 25 January 2018, which were also influenced by a decline in international share prices following concerns of rising interest rates in some advanced economies.

Year-on-year growth in the broadly defined money supply was mostly weaker than the subdued expansion in nominal GDP in 2017 and was mainly supported by growth in the deposit holdings of the household sector. Although growth in household deposits moderated from 2016 to 2017, it still surpassed growth in the deposit holdings of companies by a substantial margin. Growth in bank credit extended to the domestic private sector trended broadly sideways in 2017 and remained lacklustre in the fourth quarter of the year as business and consumer confidence remained weak. Growth in credit extension to companies decelerated further in the fourth quarter of 2017, while growth in loans and advances to the household sector remained subdued but continued to improve moderately.

The cash book deficit of national government increased significantly in the first nine months of fiscal 2017/18 compared to the same period a year earlier, as expenditure increased at a marginally faster pace than original 2017 Budget projections and revenue increased at a much slower pace than originally projected. The non-financial public-sector borrowing requirement increased notably over the same period, mostly due to the larger cash deficit of non-financial public enterprises and corporations. In order to finance the larger borrowing requirement, the total gross loan debt of national government increased from 50.6% of GDP as at 31 March 2017 to 53.1% of GDP at the end of December 2017.

Against the backdrop of a deteriorating fiscal position, the 2018 Budget Review proposed a number of measures to rebuild confidence and to return public finances to a sustainable path. These included various tax increases, most notably the first increase in the value added tax (VAT) rate in 23 years, and a marginal reduction in the expenditure ceiling. Rising spending pressure emanated primarily from the introduction of fee-free higher education for students from poor households. The consolidated government budget deficit is expected to widen significantly to 4.3% of GDP in fiscal 2017/18 before narrowing to 3.6% in the subsequent fiscal year, partly due to an improved economic growth outlook. National government’s total gross loan debt was adjusted upwards from the 2017 Budget, but by less than reflected in the 2017 MTBPS. As a result, the total gross loan debt of national government is expected to continue rising gradually, but to now stabilise at around 56% of GDP in the outer years.