The slowdown in global economic growth continued during the second quarter of 2008. This moderation in growth was largely due to a contraction in economic activity experienced in Japan and the euro area, and stagnant production volumes in the United Kingdom. Output growth accelerated in the United States (US), partly in response to temporary fiscal stimulation. Although growth in some emerging-market and developing countries also moderated during the quarter, it remained firm and continued to be underpinned by the strong performance of the Chinese economy.

Despite the moderation in growth, global output volumes continued to reach new heights in each quarter and capacity constraints continued to limit the supply of key commodities. Against this background the price of Brent crude oil, for example, rose to levels of around US$146 per barrel in early July 2008, while the prices of wheat, maize, platinum and gold were also exceptionally buoyant in the first half of 2008. Under these circumstances, inflationary pressures intensified further in both advanced and emerging-market economies. In many countries this resulted in a further tightening of the monetary policy stance. However, in a few instances concerns about decelerating economic growth and continued dislocations in the credit markets prompted central banks to reduce policy interest rates.

On the African continent real growth is expected to exceed 5 per cent for the seventh consecutive year in 2008. Net oil exporter countries have been experiencing more favourable growth than the oil importers. As elsewhere in the world, food price inflation worsened considerably in most parts of Africa during the past year.

In South Africa real gross domestic production rebounded in the second quarter of 2008 and expanded at an annualized rate of 4,9 per cent. This improvement in growth in the second quarter of 2008 reflected strong increases in real value added by the primary and secondary sectors. The expansion was concentrated in mining and manufacturing, and could partly be attributed to base effects as electricity supply improved considerably in the second quarter, following severe disruptions, which weighed on production in the preceding quarter. The pace of growth in real value added by the tertiary sector slowed as tighter economic and credit conditions resulted in the first contraction registered by the trade sector since the third quarter of 2001.

Real final consumption expenditure by general government declined in the second quarter of 2008, reflecting the statistical effect of a high base set in the first quarter when expenditure was boosted by government’s acquisition of a submarine. 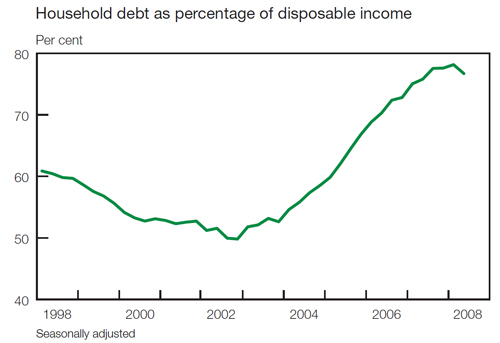 Growth in real final consumption expenditure by households lost further momentum in the second quarter of 2008, led by a sharp decline in the demand for durable goods. In addition, real outlays on semi-durable and non-durable goods and services moderated over the period. Consumption responded to the rising interest rates and cost of servicing household debt. This simultaneously contributed to greater caution among households in their use of credit: in the second quarter a reduction in the ratio of household debt to disposable income was registered, signaling the end of a four-year upswing in the household sector’s debt ratio as households slowed their pace of debt accumulation.

Real gross fixed capital formation remained buoyant, although its pace of growth slowed on account of a moderation in capital investment by all institutional sectors over the period. With the exception of the construction and commerce subsectors, capital investment moderated throughout the private sector in the second quarter of 2008. Real fixed capital expenditure by public corporations remained quite strong, supported by capital outlays to address some of the electricity-supply constraints. The slowdown in investment spending was evident among all three tiers of government.

Whereas in the first quarter of 2008 foreign direct investment inflows featured prominently in the financial account of the balance of payments, capital inflows in the second quarter mainly comprised net portfolio and other investment capital. The net capital inflows on the financial account were sufficient to finance the deficit on the current account and allow for a further increase in the net official holdings of international reserve assets. At the same time, the external value of the rand against a basket of currencies recovered moderately, having depreciated by some 20 per cent during the previous quarter. The exchange value of the rand continued to appreciate in July.

In the first half of 2008 inflation gained further momentum. As in many other parts of the world, it was driven by the rising global prices of energy and food. Of concern was not only that CPIX inflation rose further above the inflation-target range, but also that indicators of second-round inflationary forces, such as wage settlements and the rate of increase in CPIX excluding food and petrol, continued to accelerate while significant increases in electricity prices were also in the pipeline.

The deterioration in the outlook for inflation motivated the South African Reserve Bank (the Bank) to raise the repurchase rate in April and June 2008, by 50 basis points on each occasion. With the economy seeming to be responding to the tighter monetary policies, and given the signs of moderation in some of the largely exogenous drivers of inflation such as the prices of crude oil and agricultural foodstuffs, the Bank did not raise interest rates further at the August 2008 meeting of its Monetary Policy Committee (MPC). Other money-market interest rates broadly kept pace with the repurchase rate.

The yields on conventional South African government bonds as well as break-even inflation rates rose significantly from mid-January 2008 to early July in response to deteriorating inflation expectations and widening risk premiums, but subsequently receded somewhat as market participants adopted more sanguine views on future inflation. The all-share price index reached a record high on 22 May 2008, bolstered by resources shares that benefited from high commodity prices. In the two months that followed commodity prices receded and resources share prices declined, dragging the all-share price index lower, notwithstanding a recovery in the prices of financial shares. House prices performed poorly in the first seven months of 2008 and recorded the lowest rates of increase since 1999.

Turnover in the bond, share and derivatives markets remained lively in the first seven months of 2008, while nominal income and expenditure also increased apace given the relatively high rate of inflation. These developments, higher interest returns on holdings of monetary deposits, as well as speculative and precautionary motives rendered support to growth in the M3 money supply. While growth in M3 moderated somewhat over the past year, it continued to exceed that of nominal gross domestic product, resulting in an all-time low income velocity of circulation of M3 in the second quarter of 2008.

The tighter credit conditions started to manifest in slower growth in loans and advances extended by banks. In the second quarter of 2008 advances to the household sector recorded sluggish increases, in tandem with the less buoyant property and vehicle markets. However, credit extension to the corporate sector retained considerable momentum.

Government’s finances continued to be disciplined, as demonstrated by the virtually balanced fiscal position recorded in the first three months of fiscal 2008/09. Sound fiscal policy continued to nurture long-term growth prospects, building in a measure of protection against cyclical and external risks.