Real growth in the global economy accelerated somewhat in the third quarter of 2016 as both the advanced and the emerging-market economies gained some traction, led by the United States (US) and India. World trade volumes remained lustreless. In the major advanced economies inflation accelerated somewhat but still remained very low, largely shrugging off the impact of the recovery in international commodity prices from their January lows and allowing central banks to maintain their ultra-accommodative monetary policies. In the emerging- market economies inflation was generally higher, but with considerable variation in inflation outcomes and monetary policies.

Towards the end of 2016, the election of a new US president favouring major policy changes, including more protectionism and greater emphasis on domestic infrastructure brought further uncertainty to global financial markets. The Organization of the Petroleum Exporting Countries (OPEC) also agreed to cutbacks in oil production, which bolstered international oil prices and is set to add to cost-push inflation.

In South Africa the erratic pattern of economic activity continued, with real economic growth slowing notably in the third quarter of 2016 to a mere 0,2 per cent. The deterioration was largely brought about by a contraction in manufacturing output, with the most pronounced declines registered in the subsectors producing petroleum, basic iron and steel, and motor vehicles. Against a background of weak manufacturing activity, a fairly moderate winter and higher real electricity prices, electricity production also contracted during the quarter under review. Real value added by the tertiary sector rose at a slower pace in the third quarter as activity in the retail and motor-trade subsectors declined and the pace of growth in the finance and transport subsectors slowed. Production by government benefitted from the temporary activities related to the local government elections held in August 2016. With agricultural production also in the doldrums in the wake of widespread drought conditions, only the mining sector managed a firm increase in real value added in the third quarter as iron ore, diamond and copper mines raised their output.

Viewed from the expenditure side, the main reason for the deterioration in the rate of growth in real gross domestic product (GDP) in the third quarter of 2016 was a sharp decline in real net exports, reversing the strong positive contribution that this expenditure component had made  in the preceding quarter. Consumption and capital spending outcomes improved somewhat in the quarter under review.

The pace of growth in real consumption expenditure by both government and households accelerated in the third quarter of 2016. Government stepped up its real outlays to facilitate the local government elections held in August. Household spending progressed at a stronger rate than disposable income, buoyed by purchases of non-durable goods and services. Growth in real spending by households on semi-durable goods moderated during the quarter under review, while purchases of durable goods contracted further, albeit at a slower rate than before. This largely reflected a reduction in expenditure on personal transport equipment and computers. Relative to disposable income, households managed to reduce their indebtedness further, continuing the debt consolidation trend that had started at the time of the global financial crisis.

Real gross fixed capital formation registered its fourth successive quarterly decline in the     third quarter of 2016, albeit at a slower pace than before. With business confidence low and economic activity weak, capital outlays by the private sector contracted marginally. Real fixed capital expenditure by public corporations also edged lower during the quarter under review. By contrast, general government raised its real capital expenditure as the improvement of national and provincial roads continued. Inventory investment turned positive in the third quarter as firms in the mining, trade and transport sectors raised their stock levels.

As a counterpart to the poor economic growth outcome, employment creation remained subdued and the official unemployment rate increased to a record-high level in the third quarter of 2016. Wage settlements moderated slightly in the first three quarters of the year but remained above the rate of consumer price inflation. Since mid-2016, the twelve-month rate of consumer price inflation has again accelerated to levels moderately above the upper limit of the inflation target range, pushed higher by food prices which reflected the impact of the drought alongside a depreciated exchange rate of the rand. However, with international food price inflation fairly well-behaved and the exchange value of the rand having staged a recovery recently, some of the food-related inflationary pressures may be expected to moderate in the near future.

The exchange rate of the rand depreciated rapidly towards the end of 2015 and in early 2016 as political events eroded confidence, adding to the woes of declining international prices of export commodities and deteriorating terms of trade. However, the prices of South Africa’s key export commodities have risen significantly since their January 2016 lows, the terms of trade has strengthened, and the conclusion of a large international mergers and acquisitions transaction has improved sentiment towards the rand, contributing to a notable recovery in the effective exchange rate. Against this backdrop, the trade balance switched from a sizeable surplus in  the second quarter of 2016 to a small deficit in the third quarter as the extraordinarily high platinum exports of the second quarter, achieved by processing and drawing down inventories, normalised. Both the value and the volume of exports fell back in the third quarter of 2016 while imports also receded, primarily on account of weak domestic demand. Simultaneously the shortfall on the services, income and current transfer account widened slightly as net payments for services increased. As a result, the deficit on the current account of the balance of payments widened to 4,1 per cent of GDP.

The current account deficit was financed through a mix of financial flows, of which inward portfolio investment made the largest contribution in the quarter under discussion. Under these circumstances, the authorities also accumulated more international reserves towards the end of the year. South Africa’s international investment position remained positive as the country’s overall foreign assets exceeded its foreign liabilities.

The banking sector’s balance sheet continued to expand quite slowly in the year to date, with both the broad money supply and bank advances to the private sector registering single-digit year-on-year growth rates. Advances to households remained subdued whereas advances to companies displayed more vibrant growth, most notably advances to electricity firms and to entities involved in transport and communication. With house prices recording fairly slow rates of increase, low residential property turnover and little job creation, mortgage lending continued to lack momentum.

Turnover in the financial markets was brisk in the third quarter of 2016, with some repositioning prompted by factors such as swings in sentiment, fluctuations in financial rates, and the decision of the British electorate to leave the European Union. Nonetheless, overall domestic share prices have been fluctuating essentially sideways over the past two years.

With inflation pressures and risks somewhat reduced, the Monetary Policy Committee (MPC) of the South African Reserve Bank (SARB) has kept the repurchase rate unchanged at 7 per cent per annum since its March 2016 meeting. Other money-market interest rates have aligned themselves with this anchor rate, and orderly conditions have continued to prevail in the money market.

The sluggish economic growth was reflected in a moderate undercollection of tax. However, in the first half of fiscal 2016/17 the non-financial public-sector borrowing requirement narrowed marginally as the public enterprises and corporations experienced a smaller cash shortfall than in the same period a year earlier. Government continued to face strong economic headwinds, an environment of fragile growth that needs to be nurtured, and at the same time a need for real progress with fiscal consolidation in order to regain fiscal space.

Balancing these factors, the Medium Term Budget Policy Statement (MTBPS) released in October 2016 provided for the continuation of fiscal consolidation at a measured pace, with a modest further increase in taxes and a moderate reduction in government’s expenditure ceiling. This contributed to the confirmation in late November and early December 2016 of South Africa’s investment grade sovereign credit rating by all three the major credit rating agencies.

The SARB’s composite leading business cycle indicator started rising from May 2016, as reflected in the accompanying graph. Movements in this indicator typically lead the general business cycle by between 6 and 12 months. 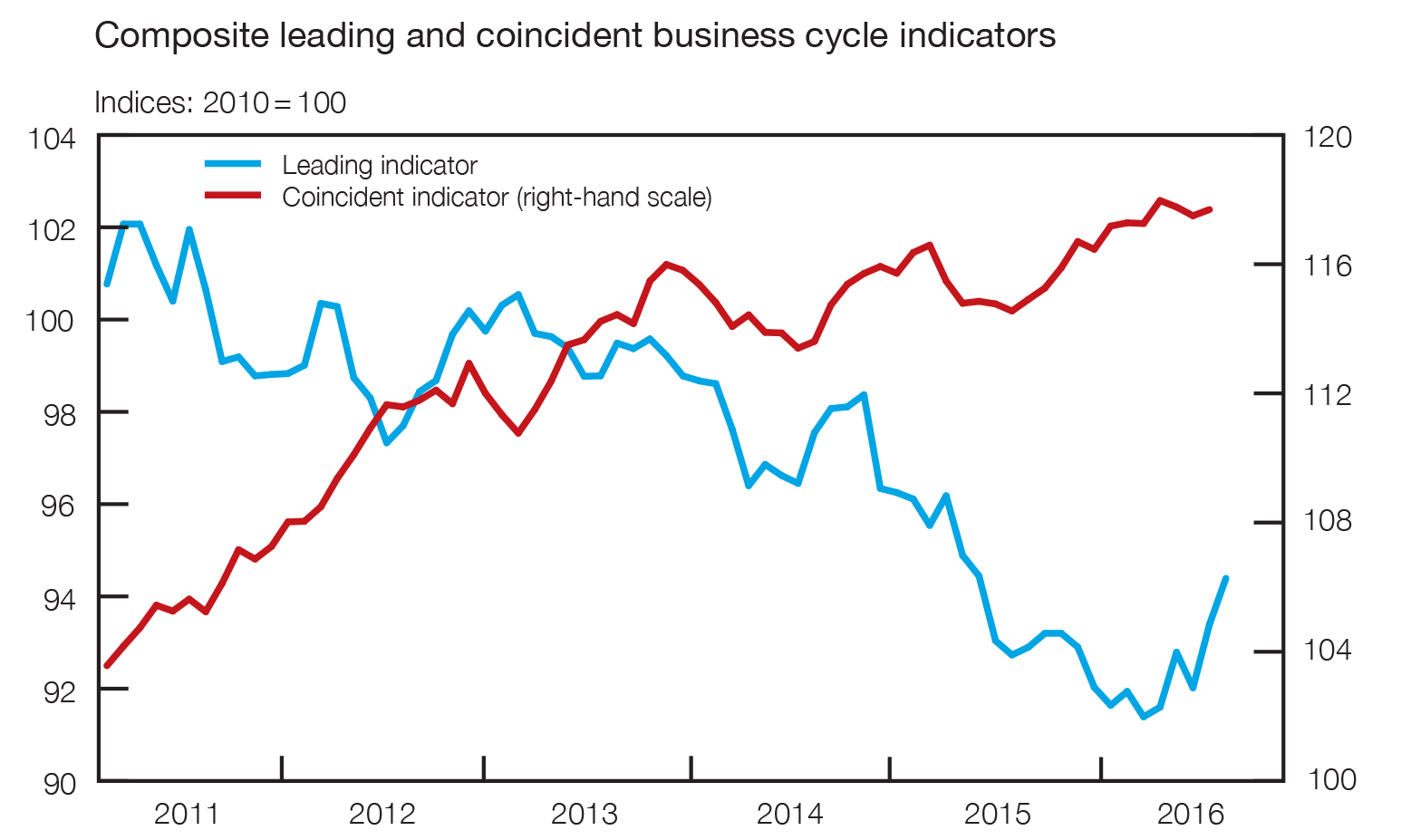