In early 2010 it became increasingly clear that the recovery in global economic activity was gaining momentum, benefiting from the large-scale monetary and fiscal stimulus that continued in most parts of the world. Although the recovery was uneven and some uncertainties remained, forecasts of economic growth in 2010 and beyond turned increasingly optimistic. Doubts regarding the creditworthiness of institutions such as Dubai World and fiscal sustainability in Greece and some other highly indebted countries nevertheless clouded expectations. Further constraining factors included the steps taken by the authorities in China to moderate the growth in credit extension, an increase in the discount rate of the Federal Reserve in the United States (US) and, more generally, the realisation that authorities would in due course have to withdraw the extraordinary stimulus measures underpinning the recovery.

With the recovery starting from a low base, the world economy continued to experience substantial surplus capacity. This contributed to international inflationary pressures remaining muted, despite the relatively high prices of a number of commodities. Central banks in a handful of countries took steps to gradually reduce the degree of monetary stimulus by raising policy interest rates, but these remained the exceptions as in most instances rates were maintained at low levels.

In South Africa the sharp economic contraction in the early part of 2009 resulted in the real gross domestic product for the year as a whole contracting by 1,8 per cent. This was accompanied by a sharp decline in employment in the private sector and a rising unemployment rate. Nevertheless, the composite leading business cycle indicator had already begun to pick up from April 2009, with the coincident indicator trending firmly higher in recent months. Economic growth recovered from negative quarter-to-quarter rates in the first half of 2009 to a small positive rate in the third quarter that strengthened considerably further in the final quarter of the year. 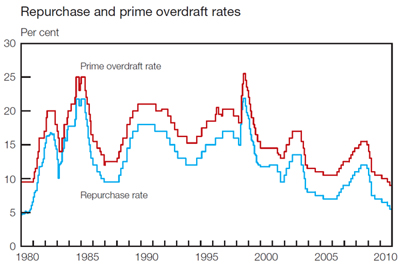 The growth in the fourth quarter of 2009 was fairly widespread across the various sectors of the economy. While agricultural production edged lower, mining output recovered, resulting in positive growth in the primary sector following earlier contractions. Manufacturing production gained further momentum from a low base, led by subsectors such as the motor vehicle industry, and contributed to an increase in output in the secondary sector. Production in the tertiary sector also rose during the quarter concerned, driven by improved trading conditions in the securities and derivatives markets, and increases in transport and communication activity.

Real domestic expenditure and final demand registered improvements in the final quarter of 2009. Following five successive quarters of contraction, real final consumption by households rose in the fourth quarter of 2009 alongside an increase in real disposable income. Expenditure on durable goods, especially new motor vehicles, rose notably during the period.

Final consumption expenditure by general government increased in the final quarter, although not as briskly as in the third quarter when military items were acquired. Real fixed capital expenditure edged lower in the fourth quarter as only the public corporations continued stepping up purchases of capital goods, with both government and the private sector reducing their capital expenditure. Inventory reductions continued in the fourth quarter, but at a slower tempo than previously.

Both import and export volumes rose in the fourth quarter of 2009, consistent with the recovery in domestic expenditure and world trade. At the same time South Africa’s terms of trade improved, contributing to a modest increase in the trade surplus and a narrowing of the deficit on the current account to marginally below 3 per cent of gross domestic product. As before the deficit was financed with ease, most prominently through inward portfolio investment flows, allowing for a moderate further accumulation of international reserves by the Bank. The effective exchange value of the rand rose somewhat further in the final quarter of 2009, and declined slightly in the first two months of 2010.

In the course of 2009 inflation moderated as production volumes remained substantially below capacity. The monetary conditions of 2008 and the strengthening of the exchange value of the rand also worked through to the price and wage formation processes, while commodity prices remained fairly contained, especially in rand terms. Despite substantial increases in electricity prices, consumer price inflation decelerated to marginally below 6 per cent towards the end of 2009 before rising to slightly above the target range in December 2009 and January 2010, largely due to base effects. Wage settlements also moderated somewhat in the course of 2009.

Orderly conditions prevailed in the money market, with short-term interest rates remaining aligned with the Bank’s repurchase rate that was held unchanged at 7 per cent per annum from August 2009. Reflecting the weak levels of economic activity and confidence, the banking sector’s balance sheet stagnated with the banks’ loans and advances to the domestic private sector actually declining slightly in nominal terms over twelve-month periods towards the end of 2009 and in early 2010. At the same time the broadly defined M3 money supply also displayed very little growth.

In the capital market the public sector increasingly issued debt securities as the infrastructure programme continued while tax revenue declined for cyclical reasons. These issues, and planned further issues in the coming years, rendered support to capital market interest rates. Share prices trended upwards during the past year, from a very low base set in early 2009. House prices also began to recover in the course of 2009.

The February 2010 Budget provided for continued fiscal stimulation that would gradually be withdrawn over the ensuing three years. The fiscal space created by prudent policies in good times make it possible to run fairly large budget deficits for a limited period, thereby bolstering the economy at a time when it is needed.

On 16 February 2010 government clarified and made explicit the mandate of the South African Reserve Bank through an open letter written to the Governor of the Bank by the Minister of Finance. The letter noted the constitutional objective of the Bank, which is to protect the value of the currency in the interest of balanced and sustainable growth. It was confirmed that the Bank should continue to pursue a target of 3 to 6 per cent for headline consumer price inflation, and should do so within a flexible inflation-targeting framework. This involves a focus on a medium-term time horizon in getting back to the target band if the economy experiences an inflation shock, thereby avoiding unnecessary instability in output and interest rates. Policy responses should have due regard for the factors that might impact on the attainment of balanced and sustainable growth, such as the source of the inflation shock, the magnitude of the gap between actual and potential economic growth, credit extension and asset bubbles, employment, and the stability and competitiveness of the exchange rate. Furthermore, the letter reaffirmed the Bank’s role in overseeing and maintaining financial stability.